The Ultimate Guide to Hoisting, Scopes, and Closures in JavaScript

ItIt may seem surprising, but in my opinion the most important and fundamental concept to understanding the JavaScript language is understanding Execution Context. By properly learning it, you’ll be positioned nicely to learn more advanced topics like hoisting, scope chains, and closures. With that in mind, what exactly is an “Execution Context”? To better understand it, let’s first take a look at how we write software.

Let’s step things up and see what happens when we start actually adding code to our program. Let’s start with adding a few variables. 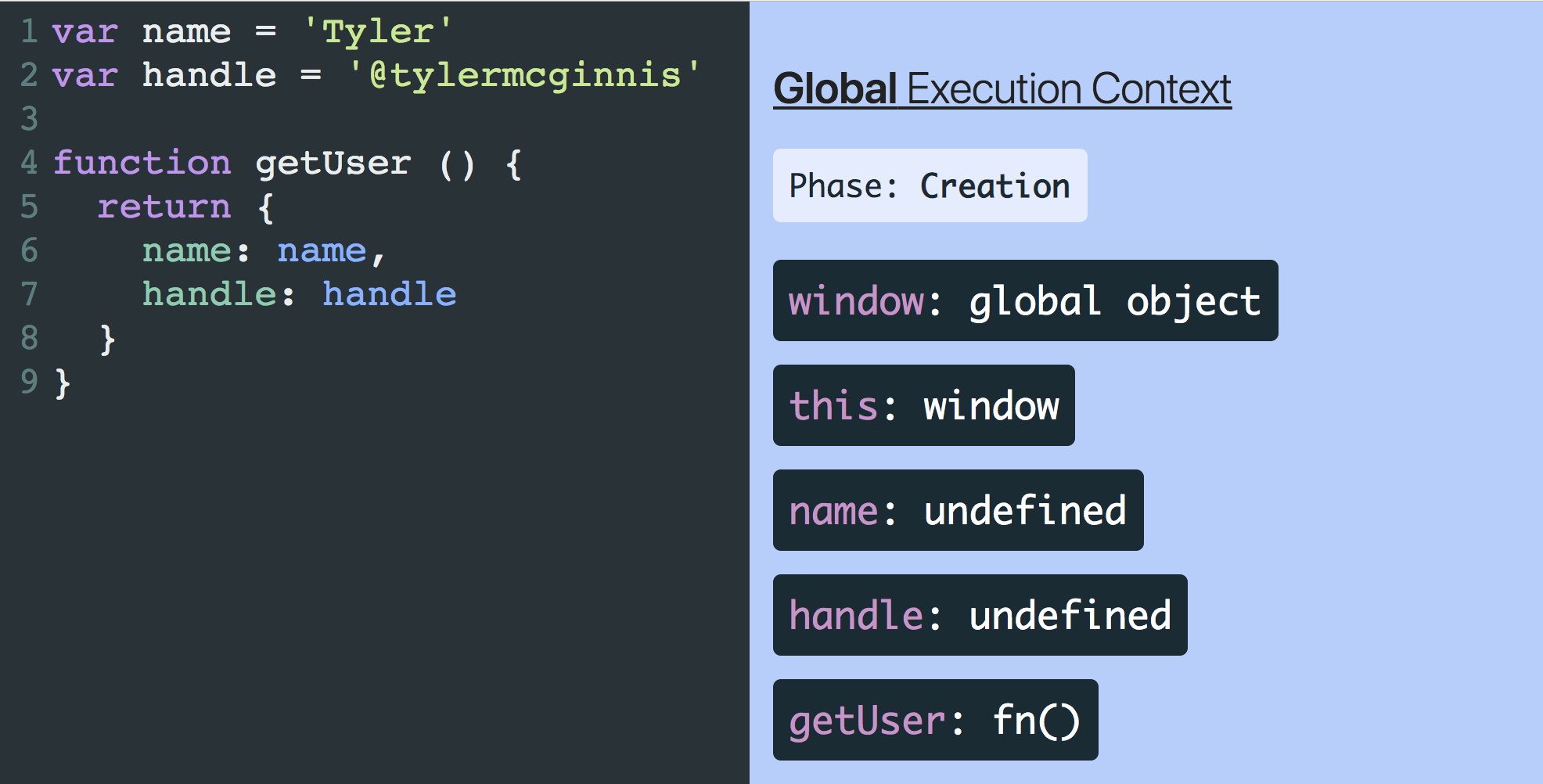 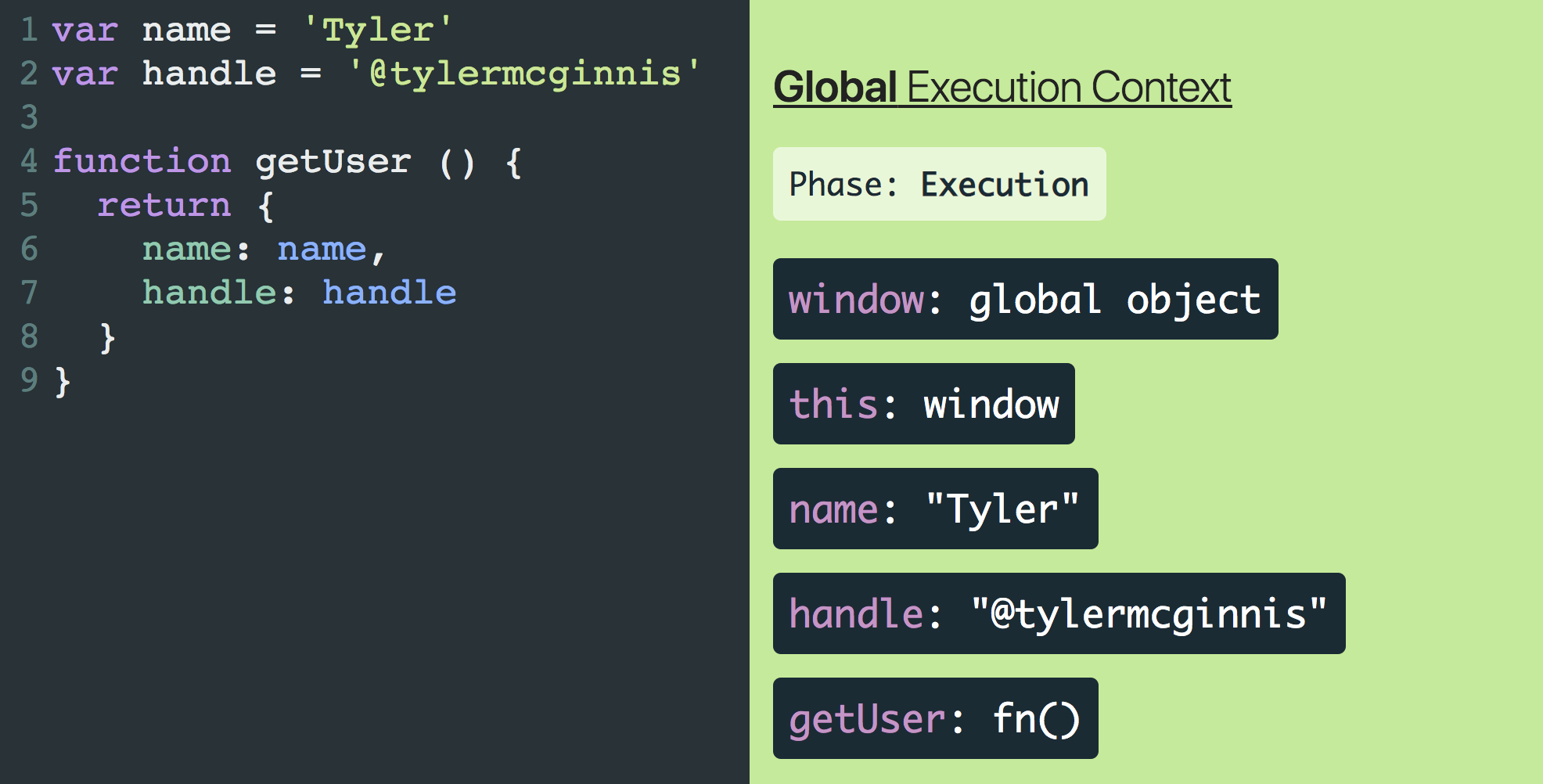 Can you spot the differences between those two image above? The key take away is that each Execution Context has two separate phases, a Creation phase and an Execution phase and each phase has its own unique responsibilities.

In the Global Creation phase, the JavaScript engine will

1) Create a global object. 2) Create an object called “this”. 3) Set up memory space for variables and functions. 4) Assign variable declarations a default value of “undefined” while placing any function declarations in memory.

It’s not until the Execution phase where the JavaScript engine starts running your code line by line and executing it.

We can see this flow from Creation phase to Execution phase in the GIF below.

During the Creation phase, window and this are created, variable declarations (name and handle) are assigned a default value of undefined, and any function declarations (getUser) are placed entirely into memory. Then once we enter the Execution phase, the JavaScript engine starts executing the code line by line and assigns the real values to the variables already living in memory.

GIFsGIFs are cool, but not as cool as stepping through the code and seeing the process for yourself. Because you deserve it, I created JavaScript Visualizer just for you. If you want to walk through the exact code above, use THIS LINK.

In the code above, what do you expect to be logged to the console? By the time the JavaScript engine starts executing our code line by line and invoking our console.logs, the Creation phase has already happened. What that means is that, as we saw earlier, the variable declarations should have been assigned a value of undefined while the function declaration should be fully in memory already. So just as we should expect, name and handle are undefined and getUser is a reference to the function in memory.

ThisThis process of assigning variable declarations a default value of undefined during the creation phase is called Hoisting.

Hopefully you just had an ‘Aha!” moment. You may have had “hoisting” explained to you previously without much success. The thing that’s confusing about “hoisting” is that nothing is actually “hoisted” or moved around. Now that you understand Execution Contexts and that variable declarations are assigned a default value of undefined during the Creation phase, you understanding “hoisting” because that’s literally all it is.

1) Create a global object. 2) Create an object called “this”. 3) Set up memory space for variables and functions. 4) Assign variable declarations a default value of “undefined” while placing any function declarations in memory.

1.
1. Create an arguments object.
2. Create an object called this.
3. Set up memory space for variables and functions.
4. Assign variable declarations a default value of “undefined” while placing any function declarations in memory.

To see this in action, let’s go back to the code we had earlier, but this time instead of just defining getUser, let’s see what happens when we invoke it.

Just as we talked about, when we invoke getUser a new Execution Context is created. During the Creation phase of getUsers Execution Context, the JavaScript engine creates a this object as well as an arguments object. Because getUser doesn’t have any variables, the JavaScript engine doesn’t need to set up any memory space or “hoist” any variable declarations.

At this point we’ve seen how function invocations create their own Execution Context which get placed on the Execution Stack. What we haven’t seen yet is how local variables play into that. Let’s change up our code so our functions have local variables.

In the past you probably heard a definition of “Scope” along the lines of “where variables are accessible”. Regardless of whether or not that made sense at the time, with your newfound knowledge of Execution Contexts and the JavaScript Visualizer tool, Scopes will be more clear than they’ve ever been. In fact, MDN defines “Scope” as “The current context of execution.” Sound familiar? We can think of “Scope” or “where variables are accessible” in a very similar way to how we’ve been thinking about execution contexts.

Here’s a test for you. What will bar be when it’s logged in the code below?

Let’s check it out in JavaScript Visualizer.

Here’s another. What will be logged to the console after the code is finished executing?

This brings up the question, what if the variable doesn’t exist in the current Execution Context? Will the JavaScript engine just stop trying to look for that variable? Let’s see an example that will answer this question. In the code below, what’s going to be logged?

Earlier we learned that variables created inside of a function are locally scoped and they can’t be (for the most part) accessed once the function’s Execution Context has been popped off the Execution Stack. It’s time to dive into that ”for the most part”. The one scenario where this isn’t true is if you have a function nested inside of another function. In this case, the child function will still have access to the outer function’s scope, even after the parent function’s Execution Context has been removed from the Execution Stack. That was a lot of words. As always, JavaScript Visualizer can help us out here.

As you probably guessed, this concept of a child function “closing” over the variable environment of its parent function is called Closures.

Here are a few more related topics that I know if I don’t mention someone will call me out on it 🙈.

In the browser, anytime you create a variable in the Global Execution Context (outside of any function), that variable will be added as a property on the window object.

In both the browser and in Node, if you create a variable without a declaration (ie without var, let, or const), that variable will also be added as a property on the global object.

let and const behave a little different than var. Check out “var vs let vs const in JavaScript” for more info.

In this article we learned that in the Creation phase of every Execution Context the JavaScript engine creates an object called this. If you want to learn more about why that’s important and how to determine what the this keyword is, I’d suggest reading WTF is this - Understanding the this keyword, call, apply, and bind in JavaScript

We wanted to change that, which is why we created Bytes. The goal was to create a JavaScript newsletter that was both educational and entertaining. 84,512 subscribers and an almost 50% weekly open rate later, it looks like we did it.

Delivered to 84,512 developers every Monday

The sense of humor and structure of the Bytes Newsletter is first class and the information that comes with it is enough to make a mini course.

Very few newsletters manage to be useful and not very boring. @uidotdev manages to achieve these pretty effortlessly. You can almost see Tyler chuckle as he writes them.

This is part of our Advanced JavaScript course. You can take the rest of the course by starting a free 3-day trial.